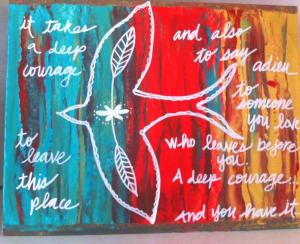 * some part of me feels compelled to label this with a warning. I’m not sure it’s necessary, but I’m going with my gut on this. It may be intense?

Sometimes I wake up from a dream, or “come to” from a day-dream where I have changed the events of the morning of October 25. The feeling that comes over me is akin to finding a solution to a riddle, and the excitement that accompanies such a revelation. It feels entirely possible! It feels like a big fat ripe aha moment and I leap toward how simple it is, only to collide with reality and have to proceed from the space of new disappointment.

It seems in all the days I have lived, everything until now has been fixable. Every mistake I have ever made had the opportunity to be resolved. Every undesirable situation could be turned into a learning experience and with it, an optimism and gratitude for the gift that came with it. Even if I “didn’t get my way” I was very good at making lemonade with any lemons that came my way. Even the “worst of times” as I knew them, before, were equipped with this philosophy. I have always been able to maneuver within defeat, extract a valuable lesson or alternative, and carry on.

When I consider that day, there are moments that I am so close, I have reached him and I am able to change his mind. The surroundings are so real that I feel the breeze in the trees and remember the sunlight that beautiful autumn morning. He is distraught but he is my sweet boy and he relents, falls into my arms, sobs a good long while, and we leave hand in hand, drive to get him some help, some relief, and some ice cream.

That morning when I spoke to him on the phone, when I heard the brokenness in his voice, I slid down the wall into a heap, trying to hold steady on the phone, but remorseful that I had driven away from Frankfort instead of recognizing the importance of the situation he was in. When I left, I never would have imagined the possibility that he would be anything other than frustrated, yes, embarrassed, yes, but ultimately, that he was built for endurance and that he, that we, would get through this and learn a lesson or two. There was not an iota of doubt about it. It is surreal to me now, considering it all, that I wouldn’t have intuitively thought I should exhaust myself looking for him (he wasn’t where he should be and I couldn’t reach him on the phone, but it was early in the morning and I assumed he was sleeping in.). I don’t think I really took it all in. I wish I had, but, as he had been begging me to stop hovering so much since his 18th birthday in August, I guess I was just assuming he was with Sophie or Dustin and even though he shouldn’t have been, I wasn’t on high alert. I cannot explain this even to myself now, so I don’t expect anyone else to understand, especially since it was out of character for me. But, I just was not worried about it. If anything, I was thinking, ok, this is an 18 yr old’s situation and I will do my best not to over involve myself, but make myself available for whatever he needs from me.

Other times, when I have not solved the riddle in my head, or rewritten history for a positive outcome, I rewrite the events and I am the one who found him dead. It is of course, a horror scene. It is unbelievable, actually, what the mind can imagine. Over and over I imagine this, and I wish when this scenario plays out that I could make it stop. I try to revive him though it is clearly useless. I do not leave his side. I look at the rest of his body and think he looks so alive. Sometimes I think perhaps this is due to the fact that I saw nothing. There is no closure, having never seen him again from the day before, full of light, my happy boy. I thank God and Joshua everyday that I never saw the aftermath of Isaac’s choice and that I never ask for details. I am quite certain I could not recover from that. But, I never saw him again. I saw a very small portion of his body, leaning against a tree, looking as though he was reading a book. I know the clothes he was wearing because of this. I did not wait for the EMT’s to put him on a stretcher and take him away in an ambulance. I fled the scene. I never held his hand or kissed him goodbye. I never saw him in a casket because we had him cremated. I am a naturally curious woman, and he was my son! But Some kind of grace protected me from myself and my tendencies that day. Something in Josh’s face cemented the deal that I must not push my way through him and the police officer that was on site, looking for him too, because he had received a phone call from Sophie that Isaac was suicidal. So, I never saw him broken, only heard it in his voice.

The actual events of that day are so clear, impenetrably clear and unchangeable. But the mind, the grief, the bargaining– wants a different outcome. So it keeps trying to maneuver reality. The one benefit to it are the moments of potential. Grief is not present in these moments, Isaac is still here in those moments. I could be easily addicted to this non reality, actually. Because they are free from this. More and more I understand how and why people choose to exist on other planes of existence! My task then, becomes to stay with the truth. Even when it hurts, to find the will & the discipline, to stay with myself through the truth. To see myself through the darkness as well as the fantasies. To be still and know. To take what is available and learn and grow from it. To find a way to choose life despite the disappointment and despair, the unchangeable horror, the loss and the agony. To find that there is more than this. That in the moments that it feels unbearable that the next moment may carry with it the hope and resolution that will sustain me. This is what I seek, one moment to the next. It is a choice I make everyday, sometimes every hour, occasionally every minute, every breath. It is a choice available to each of us. To keep going even when the going gets tough and the muck gets deep. It is how we survive, how we shine on.

The one constant unchangeable truth that matters and does not need to be rewritten or wished differently is that I always modeled this for my Isaac. Keep going. Love will see you through. Even that day. Please keep going. And today, this. is. enough. 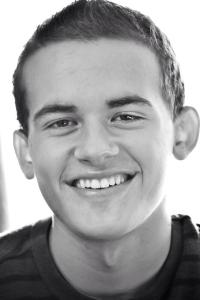